Plastic Fantastic and I hosted a panel at Doll North yesterday morning. This was our most well attended panel yet – both for humans and dollies!

Thank you everyone for coming out, participating and bringing your beautiful dolls!

If you weren’t able to attend, we recorded the panel! Turn the volume up and watch it in HD! 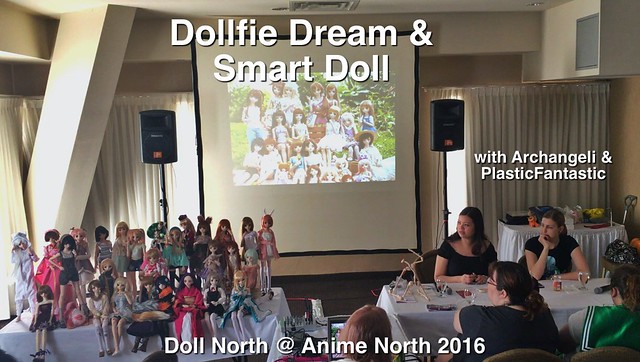 Hi everyone! I caught a little cold right after Anime North (a.k.a. “post-con plague”), and have been super busy since so I apologize for this late convention write-up! Machiko and I arrived at the convention early Friday afternoon to pick up our badges, check into our hotel and move our luggage inside and that process took longer than we planned. We then went over to the convention center to visit Whitefrosty in the Crafter’s Corner, and Machiko set up a few little things to sell since they were sharing the table.

Afterward, I met up with Kevin and we walked across to the Crowne Plaza hotel to check out the Doll North events. It was awesome to see the marketplace area completely dedicated to dolls, as well as a room that was for panels, games, and workshop. PlasticFantastic and I presented a couple of panels on Dollfie Dreams and it was great to see some new faces, as well as a few familiar ones too! We had some audience members from as far away as Ottawa, Edmonton and Buffalo! Thank you to those of you that came to the panel! Here’s a lovely group shot of the lovely DD’s that were out for the evening!

Meo brought his beautiful Sasara out, and here she is serenading everyone on her harp.

Any Dollfie Dream owning comrades out there coming to Anime North 2013?

If so, bring the girls out for a meetup at the Dollfie Dream panels at Doll North on Friday, May 24, 2013.

PlasticFantastic and I will be presenting 2 panels on Dollfie Dreams and we’d love to have you and your dolls attend. Our panels will be starting at 7:00pm and 8:00pm in the Crowne Plaza Toronto Airport Hotel (33 Carlson Court, Toronto, Ontario, M9W 6H5)

We will be discussing things such as:
– A brief history of Volks and Dollfie Dreams
– Basic care and maintenance
– Evolution and differences between body types
– How to get a DD
– Modifications
– Customization

Here’s a picture from the Dollfie Dream panel last year 🙂

For more information about 6th annual Doll North, visit the Anime North website! There is lots of exciting doll programming and it’s not only about resin BJDS’s – Blythe dolls, Monster High, all are welcome!

I hope to meet some of you there!

Another Anime North has come and gone. It’s amazing how fast those three days whirl by but it’s always a lot of fun!

On Friday evening PlasticFantastic and I hosted 2 panels as part of Doll North – which is Anime North’s programming division dedicated to ABJD’s and other related import dolls. We had a nice turnout for our panels, despite the fact that quite a few people missed it because they were still in line trying to pick up their per-registered passes! The first panel we presented was an “Introduction to Dollfie Dreams.” This had been at the request of the Doll North co-coordinators because there had been requests for more info about DD’s and vinyl dolls from members of the community in the past few months. PlasticFantastic was also on hand before our panel to offer some general DD Doctor care. I brought Hinata, Gabrielle, Mélisande, Médée and KOS-MOS with me – which is the most I’ve ever had out of the house in one outing!

The second panel “How to Survive a Dolpa” which was based on our recent adventures at the Volks Dolpa 27. We dedicated it to our friend D.ark Dollhouse who passed away earlier this month. Her Dolpa For Dummies guide proved extremely useful to us when we were preparing for our trip and was an invaluable tool.

Thank you to everyone that came, and to everyone that brought their Dollfie Dreams with them! I hope you found our panels informative! And if you weren’t able to make it, Meo was awesome enough to video the panels so hopefully we’ll have them online at some point so that we can share our knowledge!

Here are some of the awesome DD’s that were on display at our panel. Special guest is the DD custom of Momiji, Anime North’s mascot!

And a funny photo of us during the DD panel –

I’ll have some more photos from Doll North up in the next couple of days.

On Saturday, it was get-up and go to start setting up for Café Delish – Anime North’s maid café. The lineup started really early and con-ops had to weave the line outside and it wove it’s way along the front of the hotel and around the corner before we even started selling tickets! We sold out all of our seatings within a couple of hours – apologies to those who couldn’t make it in! I hope that you at least stopped by the PuriMeido photo booth in the TCC to take a photo with your favourite maid!

I had lots of people asking me – what exactly IS the PuriMeido booth? It’s our own photobooth (yup, our staff built it from scratch!) in the style of the fun purikura booths that you find at arcades in Japan. You get to chose which maid you’d like a photo with, and then you and a friend get to take 4 fun photos, and then your maid hand decorates the photo for you. Here are Susu, Misa and Akane looking adorable at the PuriMeido booth –

If you had a ticket for a seating at the café, it was also a voucher for free photo set at the PuriMeido booth ^__^”

The café went very smoothly this year – there was only 1 behind-the-scenes hiccup regarding catering from the hotel, but overall I think we created a nice, fun oasis from the crazy of the convention for our guests to relax in. Here are Momoko, Misa, Susu, Yumi, Keiko, Chiyou and Akane dancing one of their routines.

Thank you to every for coming to the café and supporting the Hospital for Sick Children. I look forward to seeing you next year!

Hello friends – it’s been a while since I’ve updated, but I’ve been waiting for the right time to share some exciting news!

Many of you know that I’ve been a member of the operational staff at Anime North’s charity maid café, Café Delish, for the past few years (no, I’m not one of the maids – sorry to disappoint!) and it sells out every year. It’s a huge time commitment from all of the amazing young ladies who volunteer, so despite many requests to expand, the café runs only from 12-6 on Saturday at the convention. Tickets sell out very fast every year, so to try to accommodate our wonderful fans who may not be able to get a ticket to a seating, there will be something very new and exciting happening this year in addition to the regular café setting. This “new addition” is planned to run the whole weekend, so if you cannot get in for a seating (which is always lots of fun!), you can still experience what makes maid café’s so popular!

More details to come, but keep your eyes on the Café Delish Facebook page for updates from our head maid, Yumi L’Amour ♥. We’ll be introducing our maids for 2012 very soon!

My next bit of news is that PlasticFantastic and I (as well as several other friends) will be going to Tokyo, Japan in early May. We plan to be at the Volks Doll Party, in addition to shopping and sight-seeing! Why am I telling you guys this? *hold that thought!*

Back in January, I was approached by the co-coordinators of Anime North’s BJD doll division – Doll North – who wanted to see if I’d be interested in hosting a Dollfie Dream panel. I was extremely excited since I really want to do something to help out the growing DD community in Toronto! Since I already have quite a bit on my plate for the convention, I asked the very knowledgeable, and super awesome PlasticFantastic if she’d be interested in this too. We had a meeting with the co-ordinators, Briknits and AgentPanda, a couple of weeks ago to discuss and plan. The panel will be on Friday of the convention (May 25, 2012), exact time to be announced later. If you are a DD owner, want to be or are just curious about these beautiful dolls, we do hope that you’ll stop by! *This is where my mentioning the Tokyo trip comes in* In addition to practical topics like DD care, maintenance, how they differ from conventional resin BJD’s, we’ll also have lots of very recent photos, videos, and first-hand experience from the Dolpa to share from our adventures in Tokyo!

Here’s my Gabrielle and PlasticFantastic’s Elle hanging out with a couple of Tinies, and a custom DD whose secret identity will be revealed soon!

I’m hoping that we may be able to take some time at the end of our panel to have an informal Figure.fm/ Culture Japan gathering and have a photoshoot session afterwards as well, so please bring your DD girls with you!

Unfortunately it’s all a bit of a tease, but I’ll have more details in the weeks to come!